Ondat is a software-defined storage platform for running stateful applications in Kubernetes.

Fundamentally, Ondat uses the storage attached to the nodes in the Ondat cluster to create and present virtual volumes into containers. Space on the host is consumed from the mount point /var/lib/storageos/data, so it is therefore recommended that disk devices are used exclusively for Ondat, as described in Managing Host Storage

Ondat is agnostic to the underlying storage and runs equally well on bare metal, in virtual machines or on cloud providers. 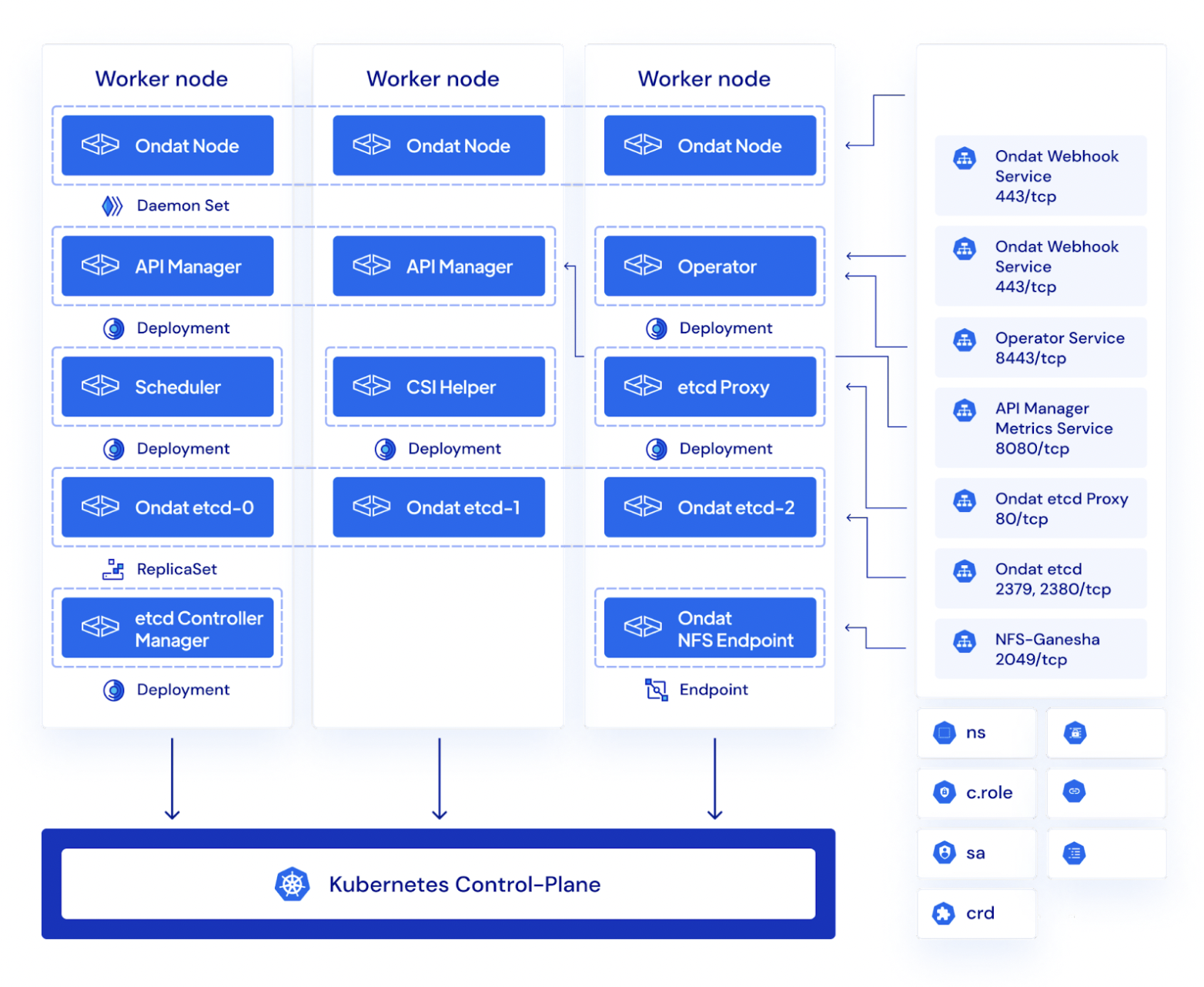 Read about the cloud native storage principles behind Ondat.

Ondat is architected as a series of containers that fulfil separate, discrete functions.

Links where appropriate have been given to our open-source GitHub repository.

Responsible for the creation and maintenance of the Ondat cluster. This operator is primarily responsible for ensuring that all the relevant applications are running in your cluster.

Responsible for monitoring and maintaining the state of volumes and nodes in the cluster. The Controlplane and the Dataplane run together in a single container, managed by a daemonset. The Controlplane works with etcd to maintain state consensus in your cluster.

Responsible for scheduling applications on the same node as an application’s volumes. Ondat uses a custom Kubernetes scheduler to handle pod placement, ensuring that volumes are deployed on the same nodes as the relevant workloads as often as possible.

Responsible for registering Ondat with Kubernetes as a CSI driver. It is necessary because the internal persistent volume controller running in Kubernetes controller-manager does not have any direct interfaces to CSI drivers. It monitors PVC objects created by users and creates/deletes volumes for them.

Acts as a middle-man between various APIs. It has all the capabilities of a Kubernetes Operator and is also able to communicate with the Ondat control plane API. This application handles typical operator tasks like labelling or removing nodes from Ondat when removed from the Kubernetes. It is continually monitoring the state of the cluster and moving it towards the desired state when necessary.

Ondat is deployed by the Ondat Cluster Operator. In Kubernetes, the Ondat Controlplane and Dataplane are deployed in a single pod managed by a daemonset. This daemonset runs on every node in the cluster that will consume or present storage. The Scheduler, CSI helper, Cluster Operator and API Manager run as separate pods and are controlled as deployments.

Ondat is designed to feel familiar to Kubernetes and Docker users. Storage is managed through standard StorageClasses and PersistentVolumeClaims, and features are controlled by Kubernetes-style labels and selectors, prefixed with storageos.com/. By default, volumes are cached to improve read performance and compressed to reduce network traffic.

Any pod may mount an Ondat virtual volume from any node that is also running Ondat, regardless of whether the pod and volume are collocated on the same node. Therefore, applications may be started or restarted on any node and access volumes transparently.

The upgrade guard is a key component of the rolling upgrade feature. It blocks certain nodes from being upgraded or drained thus avoiding data loss in the cluster.

The upgrade guard will detect if a volume is reconciling (for example, one that does not have enough synced replicas), at which point a node manager pod on the same node as the reconciling volume’s master and replicas become unready. Ondat uses a PodDisruptionBudget (PDB) to stop more than 1 node manager pod being unavailable at any point in time. This prevents the rolling upgrade from continuing until the PDB is satisfied and all volumes have fully reconciled

If the PDB is set to 1 and a Control Plane volume on a node is not ready for a long period of time, this will stop the upgrade process. The api-managercomponent will be able to dynamically set the PDB value if it can determine the health of the volume. If the api-managercomponent knows that a volume will not be ready, it can increase the PDB maxUnavailable value, allowing the upgrade to continue. The upgrade guard container will log when it is available to upgrade, it will also log the reason if upgrade is not possible.

⚠️ The upgrade guard container only monitors volumes that host a deployment on its node (for example, it doesn’t care if a volume is unhealthy if the node it’s running on hosts none of the volumes primary and replicas)

⚠️ There is some latency between a volume becoming unhealthy and the upgrade guard noticing, due to the polling nature of both the api-managercomponent volume sync Kubernetes readiness endpoints)

The Node manager is an out-of-band pod used for node management. It runs on all nodes that run the StorageOS node container and is a separate pod so that it can be restarted independently of the node container.